Pakistani banking customers are increasingly inclining towards digital banks, regardless of their physical presence, as long as they fulfill the banking needs of customers.

This was revealed by A. F. Ferguson & Co. (PricewaterhouseCoopers) in a report on Pakistan’s digital banking, titled “Banking in the Digital Age: Exploring Pakistan’s Potential.”

To understand the level of customers’ willingness to transact with digital banks as new entrants in the market, the report asked questions regarding respondents’ choice to shift such banks and loyalty to their primary banks.

As part of this pioneering initiative, they gathered perspectives from 1,000 + individuals with diverse age demographics, income brackets, employment/business backgrounds, across different geographies in Pakistan.

The report says that Pakistani customers’ are more inclined towards digital banks, with 73 percent of customers willing to switch to another bank if it meets their banking needs better than their primary bank.

The report also outlined that 54 percent of people are comfortable switching to a bank that does not have physical branches while 25 percent of customers said they would be uncomfortable making the shift.

The factors that would make people shift from their current banks, as told by the respondents, include customer care (57 percent), service agility (35 percent), mobile banking propositions (38 percent), value-added product features (39 percent), international acceptance (44 percent), rewards (37 percent), and security (35 percent). The digital banks will have to provide the above-mentioned services to attract customers from traditional banks, the report said.

However, the report also highlighted that factors like the security of personal information (69 percent), dispute resolution (57 percent), and security of funds (75 percent) could cause customers to be hesitant in switching from their current bank. 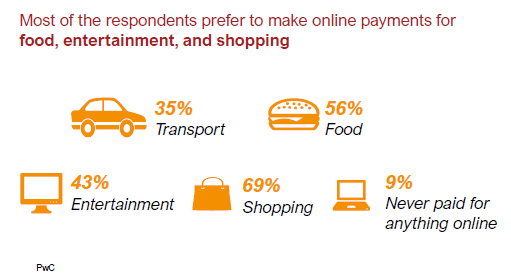 Transport, food, entertainment, and shopping are among the highlighted modes where customers use cards for payments, while 74 percent of people said they make card payments on online marketplaces, 17 percent have made card payments on social media platforms, and 54 percent of customers have used cards to pay on brand’s online websites.